THE OSCARS(r) – Television icon Ellen DeGeneres returns to host the Oscars for a second time. The Academy Awards(r) for outstanding film achievements of 2013 will be presented on Oscar Sunday, March 2, 2014, at the Dolby Theatre(r) at Hollywood & Highland Center(r) and televised live on the ABC Television Network. (Photo by Andrew Eccles/ABC via Getty Images) 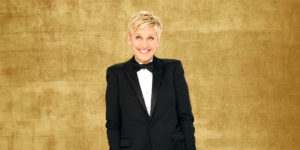